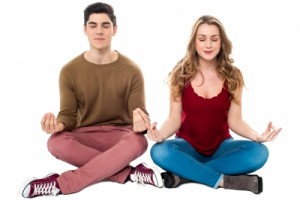 When I first started yoga I remember, to my shame, saying to my yoga teacher that I didn’t like the breathing practices, as I  found them rather boring  and only enjoyed the movement.

Now years of experience later I can see what a silly statement that was because breathing is such a fundamental part of yoga, both when practising movement -(being attentive to the breath can give freedom of movement and help us to relax into postures)- but also as a practice in its own right.

In daily life most of us don’t give breathing a second thought, but the way we breathe can  affect our physical and mental health and we can get into bad habits such as shallow, upper chest breathing.

In yoga there’s a breathing technique called the three part breath which is being aware of breathing into the belly, rib cage and upper chest and then linking all three parts  together so the breath deepens and we’re starting to use the lungs effectively.

Breathing correctly means that our bodies are being supplied with the right amount of oxygen, replenishing our brain and other vital organs with essential nutrients. If we’re not breathing well we can suffer from tension, poor concentration, fatigue, physical pain, reduced immunity to infections and illnesses-even our skin can suffer.

There is also a  strong link betwen the way we breathe and our emotions.

Most of us know about the link between hyperventilation and anxiety. However lots of other feelings affect the way we breathe. If we’re afraid  our breathing becomes quick, shallow and irregular and we can get a knotted feeling in the stomach; if we feel low our inhalations can be shallow and our exhalations long and sighing ; if we’re angry we can have physical tension, shallow inhalations and strong exhalations.

It’s hard to change the way we feel immediately, but it is possible  to get a handle on the  way we’re breathing  which in turn can start to change our emotions-so we feel more in control.

I was struck by a letter in the Prison Phoenix Trust newsletter from a prisoner in Thailand who said,  ‘Since I’ve been doing long sessions of pranayama (yoga breathing)  I must say that my peace and happiness has increased so much. I still get angry about things, but I can definitely  see the changes in my personality.’

That  sums it up really well. .  Breathing can be a very powerful tool.

Image courtesy of stockimages at FreeDigitalPhotos.net

This entry was posted in My Blog and tagged healthy breathing, pranayama. Bookmark the permalink.